These may differ slightly from machine to machine, as monitors have changed over the years to use more touchscreen controls and less physical buttons/dials. There are usually two screens: one that focuses on telemetry (sensors/monitors) and one that focuses on the ventilator and gas settings. On very old machines, there may only be one big screen, with a much tinier screen for controlling the ventilator.

There is also a separate screen for a desktop computer that runs the anesthesia charting software.

Arguably the most important non-invasive monitor, as it tells you whether the patient is being adequately ventilated. Look for an end tidal CO2 (ETCO2) of 35-45 mmHg (or 5-6%) and a pulsatile waveform inversely correlated with chest rise. While mask ventilating the patient, if you are not getting a good ETCO2 and waveform, you probably have a leak around the mask (less likely, a leak somewhere else or the CO2 sensor isn't in circuit).

This waveform sometimes shows up on the ventilator/gases screen, or even on both screens (it's that important!)

The monitors page has more examples of capnography waveforms.

You have seen these before. Generally, only two leads are monitored during anesthesia: II and V5. On low-risk cases, this may be reduced to only lead II.

The machines can do some fancy things to track ST elevations and arrhythmias (like counting PVCs), which you can ask your resident to demo for you during some down time.

If the waveform is not pulsatile, an SpO2 cannot be calculated because the baseline contribution from other tissues cannot be subtracted from the signal. The fingertip sensor can come off during repositioning of the patient; an earlobe sensor is also available in the cart.

This will show up as a large SBP/DBP reading somewhere, without any corresponding waveform. If you look carefully, you will usually also see a calculated MAP and the time interval at which the cuff will automatically take new readings. 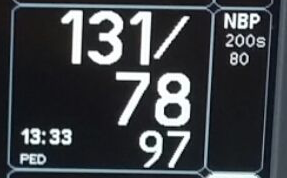 All of these settings can be adjusted using the "NIBP" button(s) on the machine.

Can measure SBP and DBP in real time with a corresponding waveform. A-lines can be inserted in the radial artery, brachial artery, or femoral artery; radial access is most common in the OR. Only used in higher cardiac risk cases or when non-invasive BP monitoring is impractical/insufficient. See the cardiopulm questions page for more info on the pros vs. cons of A-lines.

Pressure is monitored by a transducer in the line that is usually hung at the level of the right atrium. Note that after the line is placed and before starting measurements, the transducer pressure should be zeroed by exposing it to atmospheric pressure while using the Invasive Pressures: "Zero" or "Zero ALL" buttons on the screen.

This verifies that oxygen is reaching the patient and being consumed by the patient's lungs and body. Sometimes, the monitor doesn't show a waveform for it, but if it's there, it should be generally inverse to the capnography waveform.

FIO2 should generally reflect the gas output settings for the machine (unless the circuit is equilibrating to new settings), and ETO2 should be slightly lower than FIO2, representing O2 consumption.

This is usually on the monitor with gas and ventilator settings. It will show the end tidal (ET) and fraction of inspired (FI) percentages for each gas being emitted by the ventilator.

If the patient's age and weight are entered into the monitor, it can also translate the values for the inhaled anesthetic agents into multiples of the minimum alveolar concentration. Note that the colors of the readings for each gas is coordinated to the actual color of the cassettes on the outside of the cart.