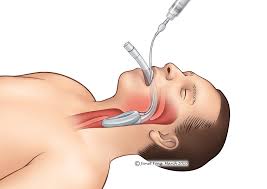 Description: An easy way to think about the LMA is as a mask that bypasses the upper airway (the pharynx) and rests over the glottic opening. It creating a circuit between the trachea and the LMA tube without actually passing through the vocal cords (see image above). Since LMA bypasses the pharynx and eliminates the possibility of airway obstruction by collapse of pharyngeal tissues (caused by muscle relaxation during anesthesia), it can be used as an alternative to endotracheal intubation. Although the LMA forms a weak supraglottic seal allowing positive pressure ventilation at low airway pressures, it does not provide adequate protection of the airway against aspiration of gastric contents.

Indications: In theory, most surgeries without aspiration risk can be performed by LMA as an alternative to endotracheal intubation (ETT). In Europe, ~ 75% of all cases involving general anesthesia use LMAs instead of ETT. Studies have shown no significant differences in outcomes between LMAs and ETT. However, in practice, ETT continues to be the predominant form of airway protection in the US.